“Submitted for your approval,” as Rod Serling used to say on “The Twilight Zone,” the fourth worst decline in U. S. stock market history 1 The tick marks are in months, and the chart shows what would have happened to a $10,000 investment in the S&P, including reinvested dividends. It dropped 49.93% over 13 months, then took seven years to recover.

It is easy to forget it. The Economist forgot it, just recently. They published a chart, “Hard Times: Comparing the severity of the worst financial crises in history.” 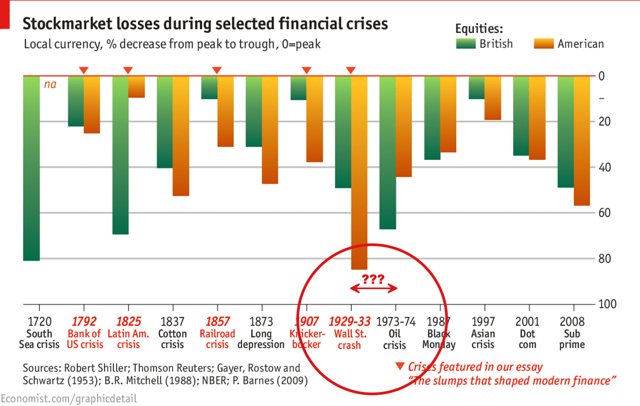 It gives the impression that there were no crashes between 1929-33 and 1973-74–a comfortable period of forty years for rest and recuperation.

It is easy to forget it, because, severe as it was, it paled in comparison to the crash of 1929 that preceded it. That crash was a 79% decline.

The yearbook says that recovery from 1929 was reached in November, 1936, and that the 1937 decline began in February, 1937. So, we have two crashes back to back, with only three months separating them.

1937 was experienced at the time as a “second” crash or “second” depression. A 1946 novel says, in passing, “when the market crashed the second time.” 2 In The Great Depression: A Diary, Benjamin Roth’s entry for December 9th, 1936 reads:

Everybody is talking about the coming “boom.” Some think it is already here and others say it will be here in 6 months or a year. At any rate, business is back to normal–new cars crowd the streets–strikes are popular, etc. Prices are rising fast and merchants have a hard time getting delivery of merchandise.

And on January 2nd, 1937 he wrote “It seems to me that it has come when we can formally and officially announce that the depression of 1929 has ended.” Just a year later, however, he wrote “The year of 1937 came to a close in the midst of depression talk and after a four month’s drop in the stock market which was the steepest in history.”

It is, then, almost a judgement call whether 1929-1944 should be regarded as a single 16-year-long bear market, or two 8-year bear markets back to back. By most ways of measuring, the stock market reached a high enough point to break the decline into two, but only just barely.

In theory, someone who invested money in 1929 and was lucky or shrewd enough to time the market had only three months within a 16-year period, during which they could have sold and gotten back to even.

“Average length of a bear market”

Ink has been spilled on the subject of “the average length of a bear market” and what happens during a “typical bear market.” During 2008-2009 numerous writers published articles comparing it to other historic bear markets.

Intentionally or not–I think it’s semi-conscious cheerleading for stocks–this data is presented in a way that makes it easy to draw overoptimistic inferences. For example, various forms of “bucket” strategy suggest that you can insulate yourself from market fluctuations by holding as little as three years in cash, on the theory that three years is long enough to “ride out the average bear market” without having to sell depressed stocks.

The average bear market since 1900 has lasted 410 days, according to calculations conducted by Ned Davis Research. Since 158 days have already elapsed since the bull market high on April 29, that means that — if this is a bear market and its length is precisely average — we have another 252 days to go.

I am sure the data is accurate as far as it goes, but whether it is appropriate depends on what use you intend to make of it. It chops time up into narrowly defined “bear markets” as if they were isolated events. 1929-1944 is depicted as eight short bear markets, none longer than three years. The effect on an ordinary retail investor–as experienced and described by Benjamin Roth and other contemporaries–is more like a single 16-year-long bear market.

The nature of stock market risk

Bear markets are embarrassing to cheerleaders for stocks. But our job, being investors, not promoters, is to understand the risk of stock market investments as best we can, without exaggeration, but without minimization. We should not have an exaggerated “fear of crashing,” as Peter Lynch put it, but neither should we pretend that they do not matter.

Let me be clear. I am not predicting any “second crash,” today, and know of any reason to expect one. All I am saying is: crashes happen. And back-to-back crashes happen. Just because we had a bad one in 2008-2009 does not guarantee that another one couldn’t happen in the near future. And, 16-year-long bear markets happen–and not just in Japan.

Ignore happy talk about the “average length of a bear market;” it’s an artificial byproduct of trying to fit a fractal curve to a peak-and-trough model. For purposes of assessing investment risk, it is more appropriate to think of 1929-1944 as being a single 16-year bear market.

The cause doesn’t matter

Almost everyone who writes about 1937 agrees that it didn’t have to happen and that somebody bungled. (The villain, and the policy that would have prevented it, vary depending on who is writing). Avoidable or not, the fact is it happened.

Perhaps in a parallel universe with sound policy and wise administration, there is an economy in which the stock market experiences gentle fluctuations free from cataclysmic crashes. Perhaps 1937, and 1929, and 1907 before that, and 1893 before that, and 1873 before that were all avoidable mistakes caused by bungling.

Bungled or not, bungling happens, now and forever, world without end, amen. It will happen again and it will happen to you and me. Economic policy bungling is just part of the risk of stock market investing.

Does snowfall affect the stock market? I will answer this question with a little rime:

Some say the Dow will end in frost,
Some say in snow;
From what I’ve gained and what I’ve lost
I hold with those who favor frost;
But if it has to hit a low
I think I know enough of cost
To say that for destruction snow
Could mean we lost
A lot of dough.

The Dow did not reach 36,000 in the year 2005. This proves that that market believes stocks are riskier than bonds.

Glassman and Hassett’s book, Dow 36,000, should not be dismissed as a ludicrous failed prediction. It is important to look at their clearly articulated reasons for that prediction. They made a closely reasoned deduction from certain premises, and the fact that the prediction failed showed that their premises were wrong.

In discussing the time frame, they said:

“How soon? The rational time frame is this afternoon. But the process will take longer as understanding spreads about the true risk of stocks. A sensible target date for Dow 36,000 is early 2005, but it could be reached much earlier than that.”

The reason was that because, in their words, it is an “undeniable historic fact” that “the stock market is no more risky than the market for Treasury bonds.”

In short, again, their own words,

The Dow 36,000 theory depends on the risk premium for stocks disappearing.

The fact is that the Dow did not reach 36,000 at or before the year 2005. The risk premium did not disappear. This shows that their premise, that “the stock market is no more risky than the market for Treasury bonds” is incorrect; or, at least, that the market does not believe it.

In 2011, Glassman said that the reason he was wrong was that “the world changed.” However, in a sense, that’s the point. The risk of stocks includes the risk that the world might change in a way that’s unfavorable to stocks.

Perhaps the publication of the new edition of Siegel’s book later this year will be the catalyst that finally makes investors understand why stocks are no riskier than bonds, causes the risk premium to disappear, and propels the Dow to 70,000 or 80,000. But I don’t think so.